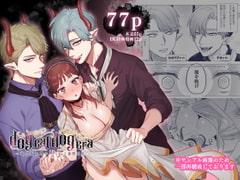 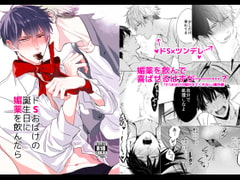 Caught in the trap of an incubus,. what future will you choose…? The second original work from Garumani is here with English subs! *Contains overlapping content with "Incubi's Purgatory: Framed Desires" (RJ245241).
*This product contains Japanese audio with subtitles in English.
[Story]
You're a beautiful college student, but you just got dumped for seemingly not feeling anything during sex.
"I don't want to date anymore," you thought,
wholly content to spend your days living peacefully with your stepbrother, Ryuusei.
Then one day, your friend invites you to a mixer, and you're too nice to refuse.
Sitting next to you at the event is Ayato Sakai, the most popular guy in school.
He has these alluring eyes, and people say he can get someone pregnant with just a glance.
Maybe it's the alcohol, or maybe it's something else,
but you find yourself falling under his spell...
"Your eyes are beautiful. Up close, your purity and your repressed desires... It's like I can take them in hand.
Please, show me your desires..."
[Characters]
Ayato Sakai (CV: Akira Miraku)
His grandfather was Italian, so he's a quarter European...
but also a quarter incubus. He's inherited some of his ancestor's power.
Even though he's not a full incubus, he can still
somewhat control people's actions with his gaze and seduce them with his charm.
Even without using his powers, though, he's surrounded by beautiful people
taken in by his allure.
He goes to the same college as you.
He's been interested in you for a long time since he first saw your drawings.
Ryuusei Kadokura (CV: Kanade Mie)
Your younger stepbrother. He's your stepmother's son from a previous marriage, so you're not related by blood.
Thanks to his small stature, he was often bullied in school and developed a reserved personality.
You always protected him, and he fell in love with you.
He wants to be able to protect you one day, like a knight.
He's also grown into a tall, model-like young man.
He goes to the same college as you so he can keep you safe.
He seems like he'd be popular, but he's still a virgin. His friends tease him for it.
You (Voiceless)
A student at an art school.
According to Ryuusei, you've got a bad eye for men.
And he seems to be right, since you keep getting dumped.
Your most recent ex was particularly hurtful and said you were like a dead fish in bed.
Because of that, you never go all the way... so you're actually still a virgin.
You've decided to never date again, but after meeting Ayato
at a mixer your friend pressured you to attend, your life changes...
[Track List]
1) Ryuusei's Worries
2) Intoxicated by His Wicked Gaze
3) Bodily Sensations Run Wild
4) The Incubus' Embrace
5) Ryuusei's Anger
6) Threefold Desire
Total playback: 103 minutes
Features begging, blindfolds, vibrators, brainwashing, threesomes, double penetration, cumming inside, and more!
Also includs two cast free talk tracks and
a special epilogue track!
Planning: DLsite Garumani
Scenario: Dusk
CVs: Akira Miraku, Kanade Mie
Illustration: Shinyu
Recorded on a dummy head microphone.